Problem with RBF interpolation in the FEniCS-x Adapter

I have problems in the coupling of OpenFOAM and FEniCSx with respect to the RBF interpolation in the FEniCSx adapter in python.

The interpolation from the OpenFOAM to the FEniCSx grid works well, however in the internal interpolation in the adapter I get the following warning

and the values written to my coupling_expression contain large errors.

I could find the following problem in the RBF interpolation on my coordinates: 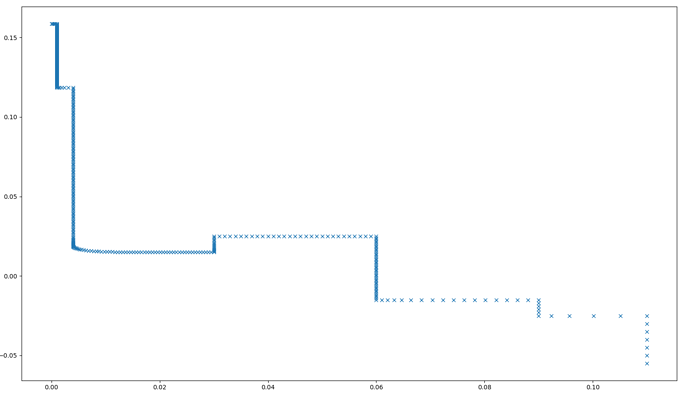 With the following coordinates:
interpolation_coords.txt (24.3 KB)

I first thought there would be duplicate nodes in interpolation_coords.txt, but this looks fine (I checked this by comparing np.unique(coords,axis=1).shape to coords.shape). Can you try to make the mesh a bit more “friendly” - e.g. by removing some nodes at the left part of the domain? Maybe this resolves the conditioning problems indicated by the warning above.

Changing the mesh is obviously only a work-around and preCICE’s RBF interpolation seems to be able to handle the mesh. So there should also be a way to get the RBFs in the FEniCS adapter working as expected. As far as I know, preCICE uses some advanced techniques for RBF interpolation (I cannot give details here, because I’m not really a RBF person). In the FEniCS adapter I only implemented the bare minimum (so far only very “friendly” meshes tested).

Maybe somebody with a better RBF background can help out here? Is the observed error something one would expect for RBFs without special treatment and the given mesh?

Using your code from above, I was able to recreate the problem. I did not find an error when using the function = 'thin-plate'. Could you try:

It appears that the matrix is badly conditioned with the default multiquadratics basis function.

thanks for your help! It seems to be much better with function=thin-plate. Do you see any possibility to integrate that in the adapter?

Was there a specific reason for you to pick the thin plate function or was it just trial-and-error?

Do you see any possibility to integrate that in the adapter?

@arvedes: Absolutely! I did not spend much of thought on how to perform the interpolation the best way. I just picked the standard configuration from scipy when developing the adapter and tested it with few test cases (with friendly meshes), where it worked well. Feel free to open an issue in the adapter. We can discuss using function=thin-plate as default there (or make it configurable, at least). With your case there is now at least one good use-case for this.

@arvedes previous work on RBF’s have shown that thin-plate works quite well, however it is a global basis function and not really suitable for large meshes (probably somewhere less than 10^4 vertices). I think the default basis function is not as stable. Another option is Compact Polynomials of Gaussian basis functions, but then this introduces the shape parameter as another input variable, hence me choosing the Thin-Plate basis function instead.

Thanks a lot to both of you, I will se what I can do to improve that in the adapter. So far I opened an issue here: Provide an option to configure the rbf-interpolation · Issue #10 · precice/fenicsx-adapter · GitHub

This topic was automatically closed 3 days after the last reply. New replies are no longer allowed.